Save a Life: Utah Naloxone and Changing the Optics of Opioid Addiction

Dialogues, Next Up, Think Again
-
No comments

As of 2016, the rate of overdose death in the US surpassed that of HIV/AIDS during its historic peak. Opioid overdose death has now become the worst public health epidemic of our time, and it is not confined to any one demographic. It is an equal opportunity killer that requires a different approach then other public health threats we have faced.

Please come in the back door if you arrive late.

What picture comes to mind when you think of a drug addict? How should we attempt to prevent people from using drugs, or to help those who find themselves struggling with addiction? A lot of what drives the conversation surrounding these topics has to do with the magnitude of impact they have had on a given person, family or community.

Stigma is often looked to as a major hurdle when it comes to tackling morally and politically charged topics. Given that stigma and bias will always exist, how do we operate more effectively when facing stigmatized issues? Looking to the experience of Utah Naloxone and its success, we will discuss not only our own stigmas, but how much the optics of our messaging can influence positive/negative response and overall success in achieving goals. 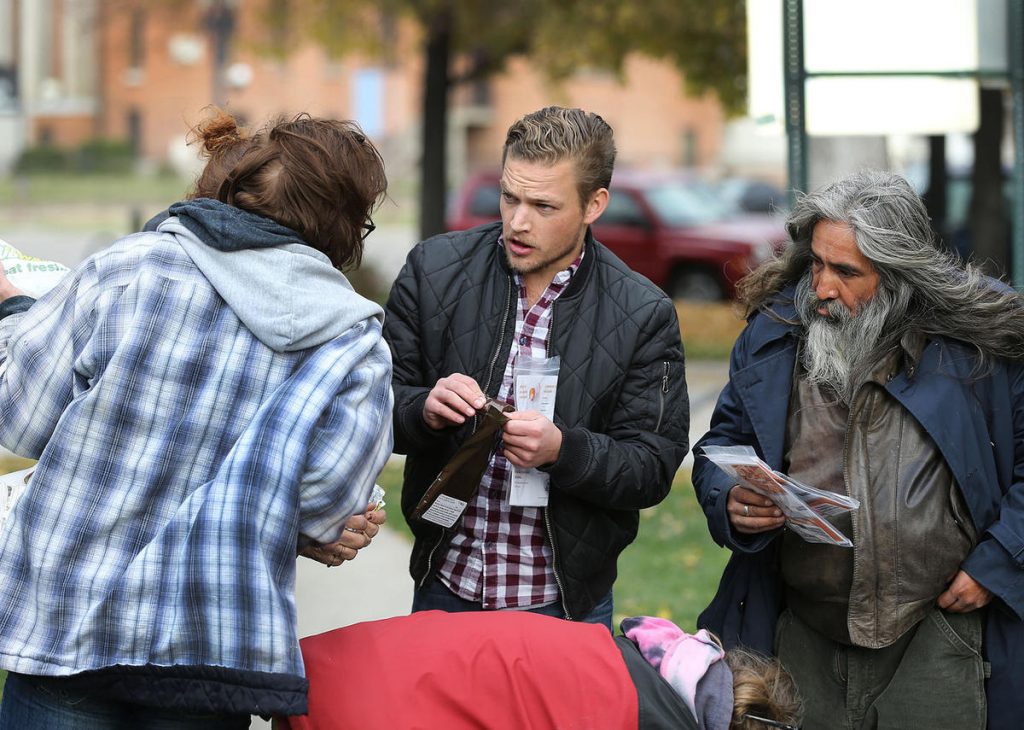 Sam Plumb was born and raised in Salt Lake City, Utah. Looking from the outside in, it would seem that the circumstances of Sam’s family were nothing short of ideal. A white middle-class family, living in the Harvard Yale area, with three kids who never wanted or needed for much if anything. There were 12 years between Sam and his older brother Andy, and 16 years between Sam and his older sister Jenny. His parents were not naïve, their surroundings were not what you would call ripe for access and exposure to drugs, namely heroin. Sam lost his brother Andrew Plumb in May of 1996 to a heroin overdose, a completely preventable death. Then and now.

Sam Plumb cofounded Utah Naloxone with his sister Dr. Jennifer Plumb in 2015. Utah Naloxone is an organization with simple goals, to increase public awareness of and access to the lifesaving medication naloxone. Simple goals that they hoped would lead to any prevention and reduction of opioid overdose death in Utah. A simple idea with simple goals is never guaranteed to be simple in its implementation. Sam and Jen were hopeful that Utah Naloxone would save the life of just one person. To save a family, much like theirs, from experiencing the loss of a loved one like their brother Andy. Their idea was new to Utah, but it was far from new. Looking to other organizations across the country, they built upon existing ideas and programs, to bring about impactful change. In less than three years, Utah Naloxone has distributed over 18,000 free naloxone rescue kits, the medication that reverses an opioid/opiate related overdose. More than 2,200 reported overdose reversals have been documented as a direct result of their kits. Every life matters, addiction should never be a death sentence.

Political Partisans: Can they only be read one way?

The CES Letter: Can it only be read one way?

Jim Bennett SUNDAY  |  FEBRUARY 9, 2020  |  7:00-9:00 pm Most skeptics insist that the evidence makes it impossible for believers to confront thorny historical and doctrinal …

How to make a difference in the world

Warner Woodworth FRIDAY  |  JANUARY 10, 2020  |  7:30-9:30 pm Warner is well known among humanitarian practitioners across the globe. Few have inspired, instructed, and instigated as …

Read More →
4 MIN READ
Slider photos and all illustrations on this site: ©2018 Jay Griffith. No use permitted without express permission from creator.  Think Again Faith Again name and logo: ©2018 Jay Griffith.
Save a Life: Utah Naloxone and Changing the Optics of Opioid Addiction | ThinkAgain | FaithAgain