Escaping the False Traditions of Our Fathers

We encourage all who can walk one block to leave their cars in the “park & ride” lot next to Wasatch Blvd. See Google map pict below. There is little parking available near their home.

In our research for the latest book we have discovered that Mormon theology tracks much more closely with the Eastern variant of Christianity than it does with the Western. We trace the loss of the “plain and precious things” in Western Christianity and how they were recuperated by Joseph at the beginning of the Restoration but have, to a great measure, been subsumed by the Protestant “traditions of our fathers” which have saturated our vocabulary and mindset with negative conceptions of the relationship between The Father and the Son and, henceforth, humanity.
We focus, in particular, on a reconceptualization of “creation,” “sin”, “fall”, “judgment”, “salvation” and “perfection.” We explore how the understanding of this vocabulary deviated quite sharply from the original Christian comprehension of these terms. For the Greek Christians the mantra was and continues to be: “For as in Adam all die; even so in Christ shall all be made alive.” In the early Christian tradition death not sin was the result of eating the fruit of the knowledge of good and evil. Mortality was a necessary education to enable mankind to develop the attributes of the Godhead.
By reframing the new and everlasting covenant as originating in premortal councils, Joseph Smith redefines Christ’s role as ennabler of our eternal progression, rather than repairman of an Edenic catastrophe, and as healer of a wounded humanity, rather than rescuer from sin. 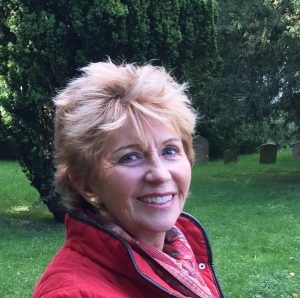 Fiona Givens was born in Nairobi, educated in British convent schools, and converted to the LDS church in Frankfurt-am-Main. She earned undergraduate degrees in French and German, followed by a graduate degree in European History while co-raising six children. Fiona has worked as a lobbyist, a translator, and as chair of a French language program. She is a frequent speaker on podcasts and at conferences, including Sunstone and Time Out for Women. She is currently working as an independent scholar, having published in Exponent II, LDS Living, The Journal of Mormon History, Dialogue, Kofford Books and other venues. In addition to co-writing The God Who Weeps (Ensign Peak, 2012), she is the joint author of The Crucible of Doubt: Reflections on the Quest for Faith (Deseret 2014). Fiona and her husband, Terryl’s most recent book, The Christ who Heals (Deseret) is due out the end of October, 2017. Fiona currently resides with her husband and Andrew’s dog, Zoe, in Montpelier, Virginia.

How is the coronavirus connecting you to nature?

Pentecost, the Holy Spirit and the Sacred Feminine in a Time of Crises

Read More →
5 MIN READ
Slider photos and all illustrations on this site: ©2018 Jay Griffith. No use permitted without express permission from creator.  Think Again Faith Again name and logo: ©2018 Jay Griffith.
Escaping the False Traditions of Our Fathers | ThinkAgain | FaithAgain